The growing season is in full swing, everything is planted, things are sprouting, and all is well.  Then, those cute, furry chipmunks or ground squirrels show up and things take a turn.  While chipmunks can be very entertaining with their antics, they can also wreak havoc for a gardener with their thieving ways and unappreciated burrows. 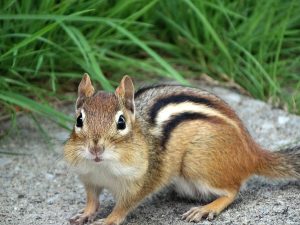 Dodge County is home to two species of these animals which concern gardeners.  The Eastern chipmunk is about 10 inches long (including a 4-5 inch tail), has brown fur on the back and sides with white underbelly and chin.  It has two tan and five black stipes that run from neck to rump, with two stripes of each color on the face.

The 13-lined ground squirrel is also 10 inches long (including a 3-inch tail).  It has brown fur with a white underbelly, and 13 alternating light and dark stripes or spots along the back, but none on the face.  One distinguishing feature between the two creatures (other than the stripes) is that chipmunks run with their tails upright while ground squirrels run with them straight out.

Most urban homeowners deal primarily with chipmunks, while rural residents might also have a problem with ground squirrels.  Chipmunks typically inhabit mature woodlands and woodlot edges, but they will also come into urban areas when food and habitat is abundant. They are a burrowing animal, with the entrance of the burrow being only about 2 inches in diameter.  These entrances can be very difficult to find because the chipmunk carries away the dirt in cheek pouches and scatters it elsewhere.  The burrow itself is quite extensive, spanning 20 to 30 feet with storage, and nesting chambers, and escape tunnels.

Eastern chipmunks emerge from hibernation early in the spring and have one litter of up to 7 young in May or June.  Their diet consists of nuts, berries, and seeds, but can also be expanded to mushroom, insects, and even small birds or eggs.

Ground squirrels prefer open grasslands.  They deliver one litter of up to 10 young from April to June Their diet is primarily grasses and forbs, although they switch to seeds later in the fall as they store food for winter.  Their burrows are similar to chipmunks, but have multiple entrances, are 15-20 feet long and 6 feet deep.

Chipmunks and ground squirrels can cause problems by burrowing under patios, sidewalks, and near foundations; they also gnaw on tree bark and wooden structures.  They can eat bulbs, seeds, seedlings, vegetable and flower plants, and pet food.  There are some simple, but effective means to control these furry friends. 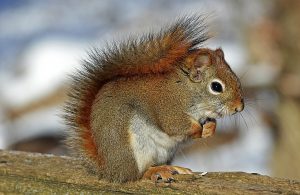 Always store all seeds and pet food in rodent-proof containers.  Move bird feeders and wood piles at least 15 to 20 feet away from buildings.  Where populations are a problem, do not landscape adjacent to a woodland area. Keep the grass cut short around buildings to minimize the cover for them and cause them to use the area less.

If further control is necessary, live traps can be purchased and used with bait such as peanut butter, nutmeats, pumpkin or sunflower seeds.  Lethal trapping using rat traps can be also be used, but take care to place them away from pets and children.  Use similar baits in these as in live traps. Place traps of either type near burrow entrance or along pathways.