For years ignorance and fear have led humans to kill bats, the only true flying mammals.  In addition, loss of habitat, disease, increased pesticide use, and man-made devices, like wind turbines, have contributed to a significant decline in the population of these creatures that are a vital part of a healthy ecosystem.

Wisconsin is home to eight different bat species, some of which overwinter in the state, while others migrate south during the winter only to return in the spring.  Despite popular myths, bats do not get tangled in human’s hair, are not blind, generally do not carry rabies (less than one percent test positive), and do not feed on blood.

Four Wisconsin bat species are permanent residents and do not migrate in the fall: big brown bat, little brown bat, eastern pipistrelle, and northern long-eared bat.  They hibernate from November through April and emerge for the summer to help gardeners and farmers from May through October.  During that time, they will raise one or two pups (young).

Four other Wisconsin bat species take up residence in trees during the summer starting in April, but migrate south for the winter.  These species are: silver-haired bat, eastern red bat, hoary bat, and evening bat.  These insect-eating machines produce one to three pups per year.

Bats are one of the best defenses when it comes to insect management for a gardener.  A single little brown bat will eat a thousand mosquito-sized insects per hour.  Pregnant and nursing mothers will eat their weight in insects each night. They hunt and eat detrimental garden pests including: leafhoppers, wasps, moths, flies, June bugs, cutworms, and of course, mosquitoes.  (Granted, mosquitoes do not destroy garden crops, but they certainly harass gardeners.) According to Bats Conservation International, scientists estimate that bats are worth over $3.7 billion per year in reduced crop damage and pesticide use. 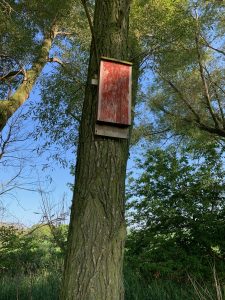 To increase the bat population in the landscape, there are two avenues to pursue.  First, provide a place to roost, and second grow plants that will attract the night flying insects they favor.  Roosts are a place for the bats to sleep, rest, or in some cases, hibernate.  Many of the Wisconsin bats will roost in trees and can benefit from the installation of a bat house.  The Wisconsin DNR has excellent plans and videos for bat houses at this site: https://dnr.wisconsin.gov/topic/WildlifeHabitat/BatHouse.html  Do not be discouraged if bats do not appear the first season.  Some times it takes a bit for them to find the area, but once they do, they will return year after year.

Consider growing some or all of the following plants, a mix of annuals and perennials: Datura, evening primrose, salvia, spearmint, phlox, four o’clocks, moonflower, Nicotiana, mock orange, evening stock, bachelor buttons, and oriental lilies.  A good combination of these plants will help bring these fascinating and beneficial creatures to your landscape.

Include night lighting in your landscape to attract night flying insects, providing both a food source for the bats as well as showing off your night blooming flowers.

Bats are an important part of the ecosystem and gardeners can strive to provide a hospitable environment that will be mutually beneficial.  A night spent watching them swoop through the night air is far more entertaining than anything on a screen.