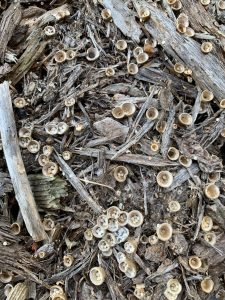 2020 has been a challenging and unusual year. The gardening season was unusual as well, as I encountered considerably more fungi than I have seen in the past. While none of these fungi are pathogenic (disease-causing), they are a site to behold, and worthy of discussion.

As you do your late fall clean up, you may still find what I consider a most fascinating local (and global) specimen: Bird’s nest fungi. Commonly found on wood mulch, these tiny (¼ to ½ inch) cup-like structures look like brownish-grey miniature bird’s nests with even tinier white eggs in them. They grow in masses and are easy to miss unless you look closely. The “eggs” are spore containing structures that splash out when hit by rain, traveling a yard or more. When they dry, they split open and release their spores to spread further. This fungus is not harmful to plants, animals, nor children, but children do find the fairy-like structures appealing.

Another common but less visually appealing fungi prevalent this summer was dog vomit slime mold. The name says it all; it really looks like dog vomit or perhaps scrambled eggs. While not a true fungus (it belongs to a unique group of organisms called myxomycetes), it looks worse than it is. It comes in white, yellow, red, or orange and can spread rapidly in just a few hours. It often germinates after a heavy rain, which we experienced frequently this summer. It is harmless and can be controlled by breaking it up and allowing it to dry out. Alternatively, use a hand lens and explore the fascinating structure while it lasts or capture some and bring it inside as a science project.

Stinkhorns are a bit shocking to someone who sees them for the first time because they strongly resemble a part of the male anatomy. However, the disagreeable smell (akin to rotting flesh) emitted from the slime produced from the mature tips give this fungus its name. The smell attracts flies and other insects that carry spores to new locations for reproduction. They spring up rather rapidly (sometimes four to six inches per hour), but are also harmless, and are relatively short lived. The immature forms are soft bodied, inch-long egg like structures, causing gardeners who stumble across them to mistake them for bird or reptile eggs. However, if they are cut apart longitudinally, the mushroom like structure is apparent. There is no fungicide treatment for this specimen, but reducing the moisture in the area is helpful.

Fungi like these come and go during the humid Wisconsin growing seasons. These and other fungal structures, including various mushrooms, will appear in the landscape. This is not an indicator of disease or poor soil health. Fungus grows on dead organic matter and recycles that plant debris into usable nutrients that improve soil fertility. Fungus cannot be completely eradicated, and we should not want that, as they provide powerful benefits to the soil. Do not always assume that a sprouting of mushrooms or fungus is something to be avoided. Certainly, if you are concerned about a child or pet picking and eating something hazardous, then remove it. Otherwise, embrace the unique beauty and be grateful for the benefits