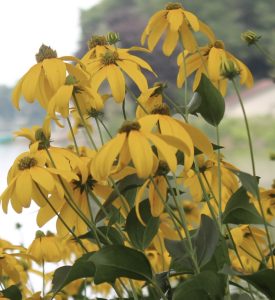 Who can resist blossoms that are the yellow-orange hues of the rising sun?  Not many of us, which accounts for the popularity of rudbeckias in gardens of all sizes and all attitudes from formal to free-wheeling.  Rudbeckias grew in our climate before Europeans settled in Wisconsin. These native species and their varieties and cultivars light up our gardens today from spring until the first frost.

Rudbeckia flowers have petals, or rays, surrounding a central cone, or eye.  The eye is laden with pollen and nectar.  This arrangement, called an open composite flower, is preferred by many floral visitors, including butterflies, moths, bees, wasps, and flies, because nourishment is so easily accessible.  Native rudbeckias are essential elements of pollinator gardens.

Sweet black-eyed susan, Rudbeckia subtomentosa, is a bushy four to six foot tall plant that begins to bloom in the heat of August and continues until frost.  Its longevity and its ability to withstand both heat and cold make sweet black-eyed susan a valuable plant for prairie restorations as well as for permanent plantings in difficult spots in smaller gardens.  Both orange coneflower and sweet black-eyed susan love full sun but also do well in partial sun.