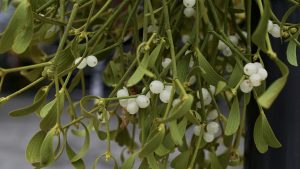 Mistletoe is a well-known Christmas decoration that has been a part of human culture for thousands of years. It has been a magical, mysterious and sacred plant of European folklore. Ancient cultures believed mistletoe had healing powers, associated it with fertility, or that it bestowed health and good luck. Kissing under a sprig of mistletoe dates to the 16th century.

There are 1,300 species of mistletoe worldwide. Of those, about 30 species grow in the continental United States and Canada. Mistletoe is recognized by the distinctive green, leathery leaves and white berries. All mistletoes are parasites, meaning they feed on other living organisms for their growth, typically trees, instead of growing in the soil. Mistletoes have a variety of hosts, usually hardwood trees, such as apple, oak, birch and American elm. The modified roots of the mistletoe called haustoria, grow through the bark into the water conducting tissue of the tree, taking nutrients and water from the host tree. Semi-parasitic mistletoe plants manufacture some of their own food through photosynthesis, but also obtain water and nutrients from the host plant.

Mistletoe comes from the Anglo-Saxon words, mistal means “dung” and tan means “twig.” Since mistletoe magically showed up on twigs or branches it was thought that mistletoe grew from where birds had left droppings.

Mistletoes also trick the host plant into producing a large cluster of stems and twigs, called witch’s broom, to provide more nutrition for the mistletoe. The dense mass of green of the witch’s broom are easily seen during the fall and winter once leaves drop from the trees.

The mistletoes associated with Christmas are within the genus Phoradendron. This scientific name is “thief of the tree” in Greek.  American mistletoe (Phoradendron leucarpum), is semi-parasitic, and is native to the eastern third of the United States. It has adapted to many climates from arid deserts to semi-tropical wetlands. Mistletoe sold for the holidays is harvested in the wild usually from trees in Oklahoma and Texas. Keep mistletoe out of the reach of small children and family pets as the berries are poisonous.

Another native mistletoe, not associated with Christmas, is the Dwarf mistletoe (Arceuthobium spp.).  Most plants are less than 3 centimeters tall.  This is a full parasite that grows around the world. Dwarf mistletoes use conifers as their host plants. These mistletoes are tiny, leafless, flowering plants. In the fall, mature fruits forcefully eject seeds at almost 60 mph. Seeds can travel 20 feet or more. The seeds are coated with a sticky substance that will adhere to whatever it touches. The Eastern dwarf mistletoe (Arceuthobium pusillum Peck) is a native species growing in northern Wisconsin. Here, its host plant is typically the black spruce.

Despite the effect mistletoe has on its host plant, it has been a natural part of a healthy forest ecosystem for millions of years. Many bird species including the black-capped chickadee, eat the berries or use the witch’s broom for nests. It’s a winter food source for many animals such as elk, deer and porcupine. The great purple hairstreak is the only butterfly in the United States that feeds on American mistletoe. These butterflies lay eggs on mistletoe, their young eat the leaves, and the adults feed on mistletoe nectar. Mistletoe is also important nectar and pollen plant for honeybees and other native bees