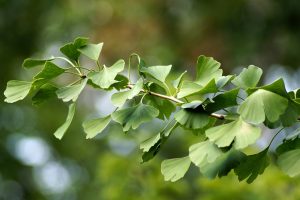 If you are looking for a tree that provides all-season interest, is not bothered by insects, disease, deer, salt-spray, or pollution, and will live in most conditions, look no further than the ginkgo (Ginkgo biloba). This vastly underutilized tree will work in most landscapes that have adequate space for a large mature tree of undeniable beauty.

Ginkgo is considered to be a “living fossil,” dating back to the Jurassic period. It was nearly extinct when Chinese Buddhist monks cultivated it in their mountain monasteries and preserved the species.  These monks subsequently sent seeds to Japan and Korea in the late 12th century, proliferating the species.  From there it made its way to Europe and North America in the 19th century.  Ginkgo trees are long-lived with a life span of upwards of 1000 years.  The oldest specimen in China is believed to be 3500 years old.

Ginkgo trees hold a unique spot botanically. They are a gymnosperm (meaning “naked seeds” in Greek) similar to conifers.  Yet, they are not conifers as they lose their leaves in the fall like a deciduous tree.  Considered a deciduous tree, it is still not related to the angiosperm (meaning “seeds in a case”) deciduous broadleaf trees.  Research shows that it is most similar to the palm-like cycads.  There are only two other plants to which it is closely related—and both are extinct.  It is the only living link between ferns and seed plants.

Ginkgo trees are dioecious, meaning they are either a male or female tree. Female trees bear a yellow-orange plum-like fruit.  When the pulpy outer covering is removed, it reveals a nut slightly larger than a pistachio, considered a delicacy in Eastern Asia.  However, the fruit of the female trees have a distinct odor described as somewhere between vomit and dog excrement.  The pulp surrounding the nut contains urushiol, the same chemical in poison ivy, and will cause the same skin irritation.  To compound the situation, the nut contains toxins, making it unwise to eat more than a few at a time.  Most people make the wise decision to stick to planting the male tree and shy away from the female tree.

One of the most appealing features of ginkgo trees is the three-inch fan-shaped leaves. They have parallel veins giving them a ribbed appearance with a cleft down the middle.  The appearance is similar to the maidenhair fern, giving rise to their common name, Maidenhair Tree.  The leaves turn yellow in the fall, depending on the cultivar varying from chartreuse to gold.  The leaves will drop overnight after a hard frost, and all the leaves on entire tree drop almost all at once.

Plant ginkgo trees in full sun and moist, but well-drained soil. It will tolerate compacted soil and dry conditions, but will have poor fall color if drought stressed.  The primary thing to avoid is very wet soils.  They are a slow growing tree, especially when young, achieving only about a foot each year.  However, they will eventually top out at 50 to 80 feet and from 30 to 80 feet wide.

There are multiple cultivar choices. Choose the one with the shape, size, and fall color that appeals to you.  Just keep in mind that you do want a male selection, and start a Jurassic Park in your own backyard.

Connect with Extension experts from universities across the country.