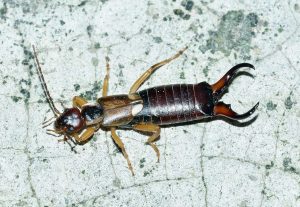 I recently watched a child discover an earwig and play with her new friend for several minutes. Unencumbered with any preconceived notions, she was enthralled as she watched it scoot back and forth and wasn’t the least bit worried about any danger.  She had the right attitude and could teach many adults to have a better relationship with these wonderful scavengers.

European earwigs (Forficula auriculari) are a relative newcomer the United States. They were first noted in 1901 in Newport, Rhode Island.   Until 1982, the only reports of them in Wisconsin were along the Lake Michigan shoreline.  Since then, they have rapidly spread across the state.

Earwigs get a bad rap and have myths and old wives’ tales surrounding them. Their unique name is derived from an Old English term stemming from the superstition that they climb into people’s ears in order to burrow into the brain and lay eggs.  Any earwig that ended up in a human ear was accidentally and it likely beat a hasty retreat.

Males have large, caliper-shaped pinchers called cerci on their posterior end. The female pinchers are straight, flat, and much less ominous looking. They are not inclined to use them on humans, but use them to capture their prey, fold their hind wings, and sense their environment.  Even if they were frightened and attempted to pinch a human, it is unlikely it would break the skin.

For the most part earwigs are beneficial insects. They are omnivorous and eat aphids, mites, fleas, and insect eggs, helping to control harmful insect populations.   They also eat mosses, lichens, and algae.  They are good scavengers and clean up dead and decaying plant matter.  Unfortunately, their palate is not particularly discerning when they are in a garden and they will also eat hostas, marigolds, lettuce, potatoes, and dahlias.

Earwigs display an unusual behavior in the insect world: they care for their young until they leave the nest. Once her eggs are laid, the mother earwig makes sure they stay safe and if they are disturbed, she rushes to reposition them.  She keeps them clean and disease free by licking them. Once they hatch, she brings food to them until the young can fend for themselves and leave the nest.  Earwigs undergo incomplete metamorphosis so the young look like miniature versions of the adults.  They will go through four or five “molts” and shed their skin, getting larger each time.  They reach adulthood in about 50 days and live for about a year.

Do not assume if you have plant damage that earwigs are the culprits. The damage by cutworms and slugs can look strikingly similar.  Earwigs are nocturnal and can be confirmed by checking around plants by flashlight at night or by looking under boards, rocks, or organic matter during the day. If they become a problem, earwigs can be trapped in rolled up newspapers or in tuna cans filled with vegetable oil.  Check the traps every morning and drop the insects into a bucket of soapy water to kill them. Make the environment less inviting by trimming back lush foliage and avoid overwatering.

If earwigs happen to hitchhike indoors, remain calm. The will not harm humans or property, nor will they reproduce inside.  Simply sweep them up and return them to the great outdoors.